I woke up Saturday with the blatant realization that Donald Trump was our President. The realization has hit me multiple times in many different ways, but for some reason, the weight of the reality didn’t quite sink in. I felt heavy, sluggish, and unmotivated.

I kept asking friends and family members to go marching with me but it seemed that no one was interested. I wondered if my reasons for going were good ones, and whether or not it would matter if I went. I mean here I was in the Bay not even in Washington.

These thoughts kept flooding my mind, distracting me from feeling awake or even alive on Saturday. All of those reasons were gone the moment I arrived at City Hall in a flood of pink hats, rainbow flags, and smiling faces shouting “Fascist laws, we don’t need them! We want reproductive freedom!”  all by myself. It was nerve wrecking, showing up to an event entirely by yourself, but it is something I will never concern myself with anymore. My petty concerns melted away and I was emboldened by the men and women marching alongside me.

One of those women Liz 44, San Jose, CA, grew up in a traditionally conservative home, couldn’t understand the fact that her rights could very well be taken away. She told me, “Love is the reason, love is the cause. Love is my motivation for being here. And ultimately that’s what we’re fighting for. It’s women’s rights, but its human rights, its civil rights, its religious rights, and equal rights.” 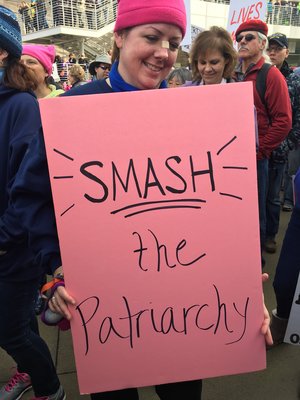 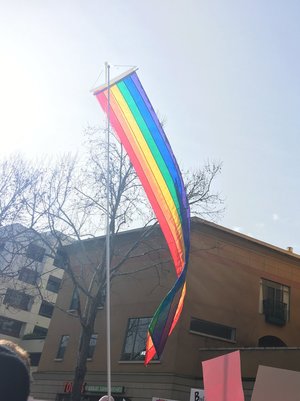 With swaths of people flooding in under the banner of equality and progress, a future is being paved based on of love and inclusion. It is one that necessarily hasn’t existed, but one that has been longed for. Nostalgia is a thing of the past, and for myself, it is something I no longer want to relish in.

People are not sad and whining. People are righteously angry, hopeful, and optimistic. But weaved through the crowds was an underlying emotion, hope. It spurred everyone on and continued to be an echo that even President Obama spoke of in his early campaign days. It is something that has been the heartbeat of the American people and something that will not die out but will grow.